The said venture is under the Department of Agriculture – Special Area for Agricultural Development (DA-SAAD) Program’s Vegetable Production Project worth Php 674,200. In November 2021, the group cultivated their 800-square meter (sqm) communal farm after receiving the interventions. 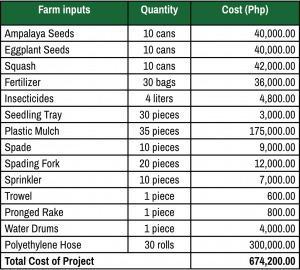 After a month and a half, PARC farmers started harvesting from January 11 to February 8, 2022 yielding 211 kg of ampalaya. They sold their produce to neighbors and adjacent sitios at Php 80/kg earning the group Php 16,920. 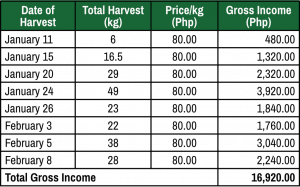 Joel Aspera, president of PARC, expressed his gratitude to the program for providing them the agricultural assistance and an additional source of income to support their families’ daily needs.

(We are very thankful to the SAAD Program. In our farm way back then, we spend money buying seeds, fertilizer and farm tools. Right now, we are able to save money because of the vegetable project that SAAD gave. Since we are able to minimize our expenses, our capital for rolling increased and income was good.)

Mr. Aspera likewise thanked SAAD for the capacity-building and technical training on Vegetable Production and Enterprise Development provided to Pasto farmers. The training provided a refresher on farm practices for efficient and independent food production.

Ampalaya, which is a member of the Cucurbitaceae family, is susceptible to soilborne diseases such as bacterial wilt with incidence and severity aggravated by excess soil moisture. Aside from diseases, pests such as fruit flies cause severe losses in ampalaya.

Transporting their produce to the town market also became a challenge for PARC since majority of the locals traverse long stretches of rugged roads just to get to the poblacion – approximately 60 kilometers from Barangay Magticol. A “habal-habal” is available but farmers have to pay a round trip fare of Php 200 and an additional Php 100 for their agricultural products. For now, the group sells to their community, neighboring sitios and barangays.

The cooperative is aiming to expand their market linkages in the town proper to access more buyers. Citing initial talks with other members, Aspera said that they plan to purchase a vehicle to transport their produce to the market.

Furthermore, they intend to venture in value-adding products such as pickled vegetables which they learned from the Enterprise Development Training conducted by the program in October 2021.

They are expecting to harvest squash and eggplant from their vegetable garden on March 2022. ###