APAYAO, January 7, 2022 – Tractor service providers in Flora, Apayao, who are beneficiaries of the Department of Agriculture – Special Area for Agricultural Development (DA-SAAD) Program, earned an accumulated gross income of Php 145,820 from 2018 to present operations.

The FCA earned for rendering services to local farm owners from seven cropping seasons (2018 to 2021).

MAST FCA with 44 members is a cooperative for rural workers, specifically for the underemployed and home-based workers with identified capabilities to engage in entrepreneurial activities.

The group was registered at the Department of Labor and Employment (DOLE) on June 13, 2017, and received SAAD’s Rice Production Project in 2016 worth Php 1.2 million.

As a service provider

According to Mr. Bagabay, the tractor supports major farm operations such as ploughing, harrowing, sowing, harvesting, transporting, and making land preparation easier both for corn and rice production areas.

Mr. Bagabay said the adaptation of the technology gives ease and improves farming activities compared to the manual methods. Modernizing farming methods saves farm laborers time and effort, which hopefully should translate to a more competitive means of production.

From 2018 to 2021, the total expense for the maintenance of the machinery reached Php 53,973 (Table 2). It includes fuel, oil filter, oil change, and replacement of destroyed machine parts. The group also paid Php 22,935 for the labor cost.

Table 2. Operation and Maintenance Cost of the four-wheel-drive tractor 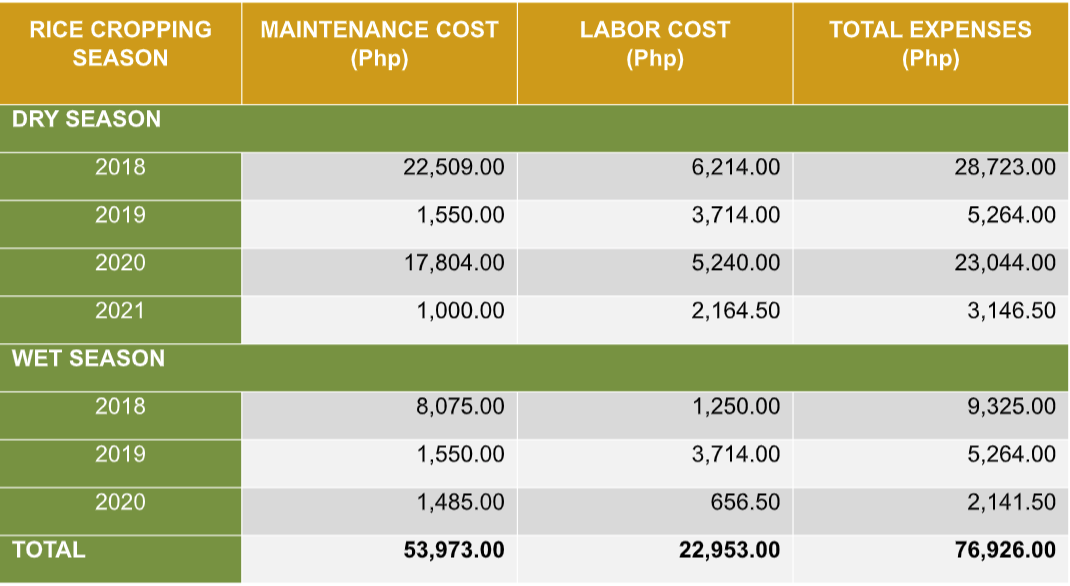 Regular inspection and maintenance are done every cropping season to prevent further damages.
In total, the group earned a net income of Php 68,912 (Table 3). 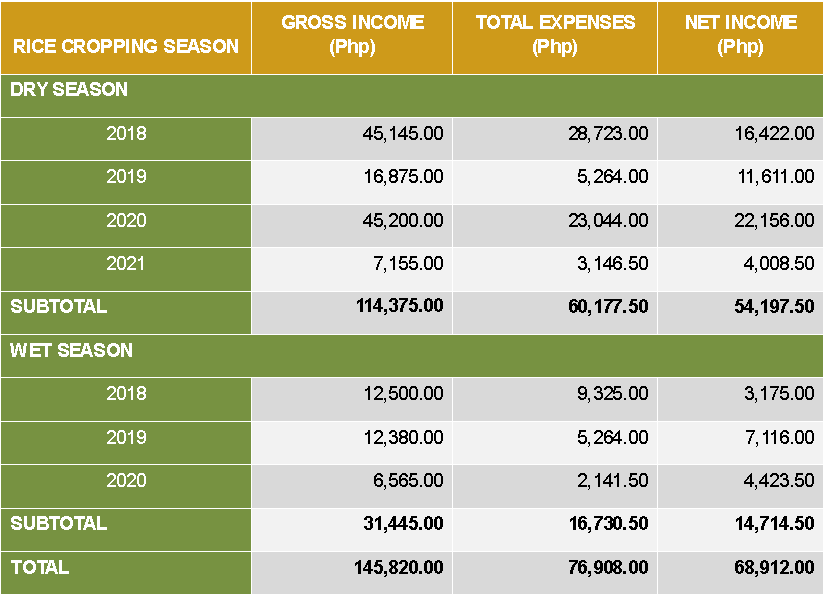 The accumulated income per cropping season was apportioned into three: 50% for machine maintenance and labor costs, 30% for members’ incentives, and 20% for the association’s savings.

Problems Encountered and Plans
According to beneficiaries, the current modernization of farming groups resulted in losing potential clients and areas they can provide service for.

As part of their management plans, the group agreed to scout possible clients for the next harvest period, enabling them to secure next season’s service operations.

[Due to the increasing number of machinery in our area, we experienced difficulty in getting clients. To mitigate our problem, we agreed that before the cropping season, members will be looking for possible clients in advance.]

The group now looks at the possibility of opening a cooperative bank account to secure the transparency of funds. ###