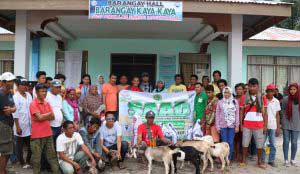 MAGUINDANAO — Five hundred fifty (550) mallard ducks, one hundred twenty-five (125) goats, and one hundred (100) bags of feeds was distributed to (25) beneficiaries from Barangay Kaya-kaya, Municipality of Datu Abdullah Sangki, Maguindanao from the Special Area for Agricultural Development (SAAD) Program on February 05, 2018. 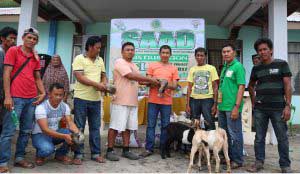 Barangay Kaya-kaya is remote, due to the geographic conditions of the area and thus difficult to reach by government projects. This is one of the reasons why it was chosen as part of the Integrated Sustainable Livelihood Assistance for Maguindanao (ISLAM) Project 2017 of the SAAD program.

On the momentous event, Mr. Edris Sangki, the Association of Barangay Councils (ABC) President of Datu Abdullah Sangki, gave emphasis on how the commodities can help the beneficiaries. He stated, as translated from the Maguindanao dialect: “These serve as your capital. So, I’m encouraging you to manage it well. In addition, let us work together to be progressive.” ###