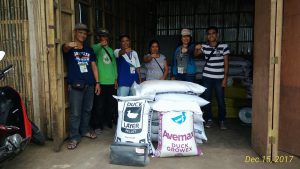 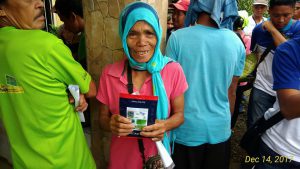 A total of 488 farmers in Magpet received one bag each of hybrid corn seeds last December 14, 2017 at the Magpet Municipal Gym. They were also given vegetable seeds with the initiative of Isaac Bangcaya, Regional Technical Director of Research in Kidapawan City.

Rice farmer-beneficiaries in the municipality will also receive a total of 880 hybrid rice seeds and fertilizers when supplies arrive. 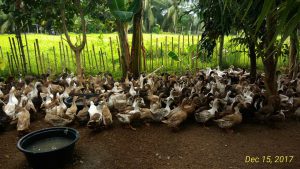 Meanwhile, in the municipality of Pigcawayan, the Pigcawayan Skylab Operators and Drivers Association and the Samahan ng mga Indibidwal na May Kapansanan sa Pigcawayan were given 200 heads each of mallard ducks last December 15, 2017. A total of 100 sacks of layer feeds and 35 sacks of grower feeds were also distributed to the said associations.

Pinamulaan Farmers Association and Bagong Pag-Asa Cooperative will also receive mallard ducks and feeds upon the arrival of supplies.

According to SAAD North Cotabato team, many farmers expressed their gratitude because of the growing presence of the Department of Agriculture and its sincerity to reach out to every farmer.

The province of North Cotabato was chosen as one of the CY2017 priority provinces of the SAAD Program due to its high poverty incidence rate among families which is at 44.8% based on the 2012 data of the Philippine Statistics Authority. ###