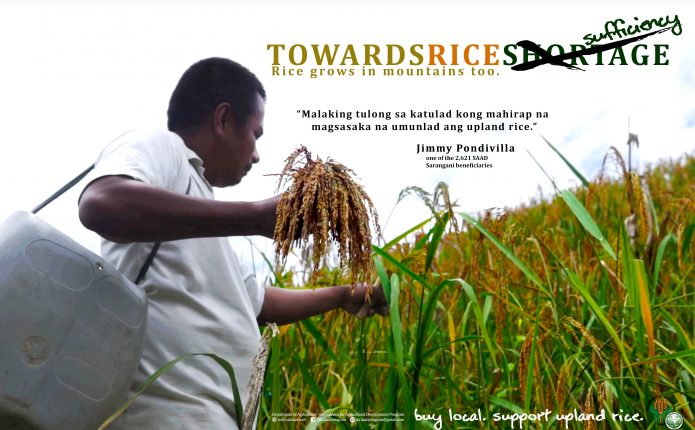 Rice has always been vital to the Filipinos. Not only it feeds millions of people, but it also contributes greatly to the growth of the Philippine economy. The production of rice, along with other major crops, is crucial in boosting the Philippine Agriculture, which is the number one economic driver in the country.

According to the Philippine Statistics Authority (PSA), the rice output for the first half of 2017 is relatively higher than of January-June output in 2016 by 12.06%. This is through the joint effort of the Department of Agriculture and the various local government units in providing agri-inputs to the farmers during their cropping seasons.

However, despite the significant increase in production, rice supply in the country still remains unequal to the growing demand of the Filipinos. In Sarangani alone, where 559, 455 people reside, the lowland rice produced only met barely half of the requirement resulting to merely 35% rice sufficiency in the province in 2015. This is due to various constraints such as less irrigation and lack of production facilities/equipment plus the pests that munch on the plants which limit the production. In cases like this, where shall we get the resources, enough to supply all the demands in rice?

Upland rice is seen as the best solution to increase the supply in Sarangani. This variety of rice shows more resiliencies against abrupt changes in the climate, and less reliability to irrigation hence making it the perfect alternative to lowland rice.

While others simply resort to importing rice from the neighboring countries, Sarangani is venturing to its upland areas for additional supply. Upland areas make up most of the province’s terrain which is suitable for planting upland products.

Aside from increase in the supply of rice, upland rice industry targets to reach out to the Indigenous People (IPs) and local farmers living in the highlands of Sarangani. These people are mostly poor despite owning large farmlands. This is mainly because of the lack of access to market their products as well as the absence of proper knowledge in maximizing their upland farms.

The Department of Agriculture – Special Area for Agricultural Development (DA-SAAD) Program aims to suffice the need of the upland farmers in order to produce more not solely for the province to have enough supply, but first and foremost, to be able to sustain the needs of the farmers, be able to provide food on their own plates and live out of the poverty line.

With the help of the Provincial Government of Sarangani, the DA-SAAD program targets to develop the Upland Rice and Corn in the province. Last May 2017, the 125 farmers of New Aklan in Glan Sarangani received 80 kilos of Upland Rice Seeds which they are now harvesting. Series of training on Organic Farming and other farming methods were as well conducted to seven municipalities in Sarangani (including Glan). Other inputs such as fertilizers, farm and garden tools, vegetable seeds, and livestock have been and will still be distributed to provide additional livelihood to the beneficiaries while waiting for the harvest season.

While the problem in rice is being responded, the IPs and poor farmers are also being catered; hence the DA-SAAD is definitely hitting two goals with one sprout. We can also support this kind of campaign towards rice sufficiency not only in Sarangani but in Mindanao as well and soon in the whole Philippines by simply buying local and supporting the Sarangani’s Upland Rice. ###