The FAs were identified to participate in the DA-SAAD simultaneous Leadership Training across Southern Leyte. As of March 10, 2022, there are already six (6) FAs with 120 members from Malitbog, Sogod, Liloan, and Tomas Oppus, who participated in the training (Table1).

Nine more FAs from the municipalities of San Francisco, Pintuyan, Bontoc, and Saint Bernard will undergo the same training this month to enhance their leadership capabilities and management skills. Further, once all the FAs completed the leadership training, a social preparation on financial and entrepreneurial management will also be conducted to fully equip the members on their agricultural endeavors. 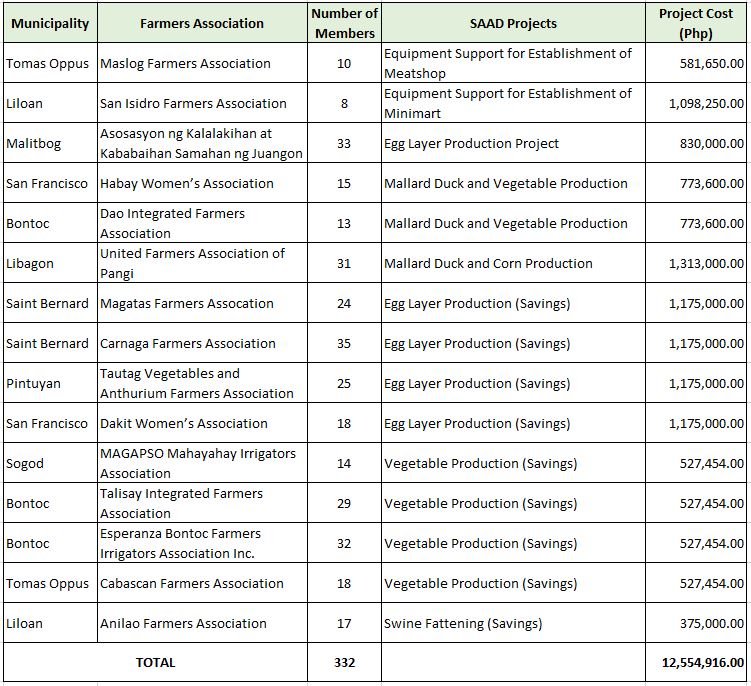 Since receiving interventions from SAAD, the FAs were monitored and mentored to transform into sustainable agri-enterprises. Unfortunately, when Typhoon Odette hit Eastern Visayas in December 2021, major crops, as well as livestock were heavily damaged. SAAD Region 8 Program Management then has re-aligned the enterprise interventions such as minimart, meat shop, and balut/salted egg enterprises into food production interventions to help the farmers get back on their feet and recover from the recent calamity.

Among the fifteen FAs, San Isidro Farmers Association in Liloan and Maslog Farmers Integrated Livestock Poultry Breeders Association in Tomas Oppus decided to pursue the minimart and meatshop enterprises, respectively. The FAs decided to pursue the enterprises as they have saved enough funds to sustain the projects and since their production sites were marginally damaged compared to other FAs.

“Typhoon Odette has significantly changed the role of leadership in farmers’ organizations. During the crisis, the leader’s role shifts, and those true leaders prioritize and respond to the needs of the people that follow them. This training is not only intended for officers, everyone is taught to develop self-leadership where all members need to set an example by leading themselves beyond the boundaries of their own concerns and uncertainties.”

(We thought that the government would no longer help us because of the huge damage brought by (Typhoon) Odette. We even forgot that SAAD is just behind our back. This Leadership Training that they had given to us helped us a lot to regain our self-confidence and stand up quickly even though our houses and livelihood got destroyed.)

Indeed, farmers are one of the most resilient workers among all professions. No matter the devastation, they are ready to stand up and move forward, for in their hands rely upon the food of our countrymen. SAAD will continue the interventions to beneficiaries and fulfill its mission to empower marginalized farmers. ###