Formed through an existing cooperative, PaCLayFA became part of SAAD in February 2020. Members of the cooperative mostly farm onions while their wives usually stay at home to focus on rearing their children, limiting their income-generating activities.

To empower the farmers’ wives, DA-SAAD conducted social preparation and identified RTL chicken egg production project as an ideal livelihood for the beneficiaries. The municipality has a steady demand for eggs and it fetches a good price in the local market that ranges from Php 6 to Php 8 apiece, depending on size and quality.

The project aims to provide livelihood for housewives in the area while still being able to focus on their families.

To kickstart the group’s egg production, SAAD awarded 288 head of RTL chicken (Lohmann breed), 150 sacks of layer chicken feeds, 78 liters of multivitamins, and 6 sets of cages in October 2020 (Table 1). The group built an RTL housing as their counterpart to the project.

In their second month, the association tripled its production, harvesting 6,773 pieces of eggs in January 2021. The group’s chicken had started to reach their peak, hence the increase in egg production.

The group maintained the egg production in their third month, recording 6,748 harvested eggs.

In March and April 2021, the group recorded another increase in their egg production with 7,549 harvested eggs in March and 7,042 eggs in April which were sold for Php 98,881. The group’s egg production steadied by then, producing an average of 6,500 eggs per month.

After ten months of production, the group has already earned Php 378,170. The group uses this to fund monetary loans for members at 2% interest, a lower rate compared to other lending groups in the area, which helps members with their farm inputs. 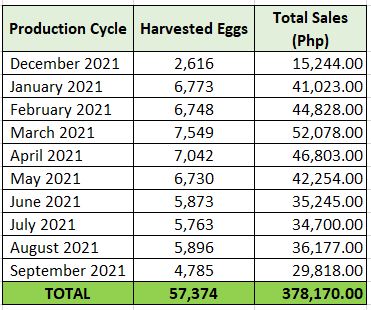 In June, the group noticed a subtle decrease in egg production which is attributed to mortality and age of the RTL chicken. This signaled the association for the need for RTL repopulation.

In response, SAAD awarded another set of 288 head of RTL chicken (Hisex breed) in September 2021 to the group to boost their production and to give them a head start for when the next repopulation calls (Table 3).

The group purchased a portable welding machine which they use for repairs of RTL housing. The group is also looking for possibilities to offer welding services in their area to increase the association’s income.

The interest collected from the group’s loan is allocated for the poultry’s expansion and sustainability efforts.

Members earn by becoming resellers, buying eggs from their association for a discounted price, and supplying eggs to sari-sari stores and other small businesses.

In addition, a Php 300 daily salary is given to the member assigned to tend to the group’s egg production – another avenue for job creation among members.

(The egg production is a great help to us, especially to those women who are unemployed. It helps us with our expenses and farm inputs.)

The second batch of RTL chicken arrived in September 2021 but it did not yield eggs until October. In its onset, Hisex produced 342 eggs in its 24th week. In contrast, The Lohmann batch was in its 20th week, and the production is almost seven (7) times higher compared to Hisex batch’s first production.

While the Lohmann batch took almost two months before being able to produce eggs, it produced 346 eggs more compared to Hisex’s production in two months prior to its initial production.

Comparing the sizes of eggs, Lohmann batch produces large, extra-large, to jumbo eggs which sell at Php 205, 220, and 235 per tray (30 pieces per tray) respectively. In addition, the members reported to have collected a number of double-yolk eggs.

On the other hand, Hisex batch produces medium to large eggs. Medium-sized eggs sell for Php 190, and members noticed that the batch does not produce double yolks.

In terms of the number of feeds and other inputs, the association maintains the same amount for the two batches, consuming one (1) sack of feeds per day for 508 heads of RTL chicken.

As of February 2022, the association has recorded 52 mortalities from Lohmann batch while Hisex had 16 deaths (Table 5).

According to Ms. Gonzales, both Hisex and Lohmann are susceptible to vent prolapse. They have observed that even though the former produce smaller eggs, there are instances where eggs have blood on them which indicates prolapse.

There are also instances where chicken fight against each other, as members described, causing injuries and chicken getting stuck between gaps of cages resulting in death. This seldom happens but still caused several deaths.

The number one cause of mortality for both batches is a digestive disease caused by eating weevil-infested feeds. The infestation resulted from storing feeds beyond ideal storage duration.

150 bags of feeds were initially delivered to the association, and the group was not able to consume all in three (3) months (maximum storage duration) since the stock is supposed to last for ten (10) months. This caused the remaining bags of feeds to be infested with weevil.

The group immediately pulled out the infested feeds and bought new ones which caused extra expense for the association. The chicken were treated with antibiotics to prevent mortality, but there were a handful who still succumbed to death.

A third batch of RTL chicken is seen to be a part of the association’s future. As SAAD National Director Myer G. Mula suggested during his visit, a third batch of RTL will ensure continuous production of eggs, steadying the group’s income.

The group will continue to observe the two batches and the findings will determine which breed will be chosen for the additional batch, though the association is leaning toward Lohmann breed.