MTFFA president Adelina Kilapkilap is grateful to SAAD for the unexpected income from selling her cattle at the auction market.

(I earned Php 35,000.00 from my cattle. Even if we lack sleep from last night’s auction, we are still happy with the outcome. All of our cattle were sold.)

The total gross sales of the 15 members who joined the auction reached more than Php 400,000. Beneficiaries of the SAAD program who received cattle can sell their animals twice, as specified in the memorandum of agreement (MOA) of the backyard cattle fattening program in 2021. 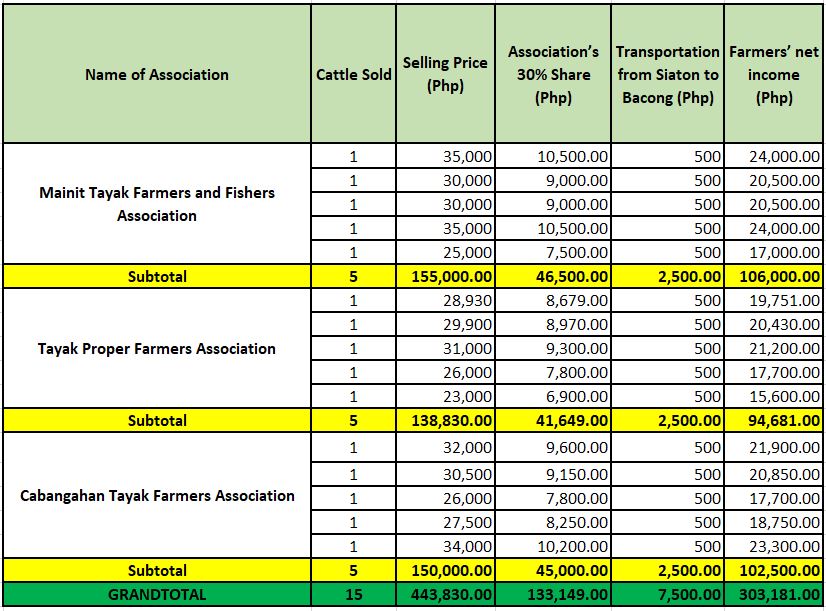 (We are grateful to the SAAD program for giving us this project. We didn’t expect to receive this intervention. We can feel that we are really valued.)

Despite being first-timers, the farmers’ marketing and negotiation skills were tested. The FAs promised to monitor their interventions consistently to produce quality cattle and have a better sale on the next auction.

According to SAAD Focal Mae Montecillo, under the MOA, the members who are able to sell their cattle are to allocate 30 % to their respective associations as a sustainability scheme of the project. The collective income made more than Php 130,000, which will be used to buy cattle for other members who have not received their share during the initial distribution.

The 15 beneficiaries assured to sustain the project. After completing their obligation to their associations, some will still continue fattening while others can diversify to supplementary agribusiness endeavors such as cattle production, meat processing, and livestock raising. ###