Each of the 140 members from both Calagango People’s Association Incorporated (CPAI) and Rang-ay San Quintin Farmers Association (RSQFA) received assorted vegetable seeds such as tomato, okra, ampalaya, eggplant, and chili pepper seeds in January this year.

Aside from seeds, SAAD CAR initially provided the said FCAs with planting materials, calamansi and dwarf coconut seedlings, goat/chicken stocks, and farm inputs and equipment in 2021. The interventions were used by the farmers in starting up their agroforestry implementation to cover their accumulated 100-hectare land.

Table 1. Received Interventions by the RSQFA and CAPI. 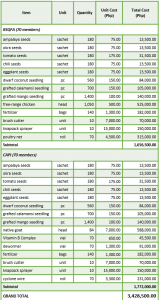 (We are thankful for the capital that SAAD had brought. The growth of mango here in our area is good and hopefully when these trees start to bear fruits, we can market them to augment our income.)

Agroforestry is the integration of trees, shrubs, and livestock in one area and is considered to be a promising and sustainable approach to land use.

Demonstration and hands-on training were also steered to familiarize and upskill farmers on said topics by resource speakers Efraem Rodriguez from DA regional office, Patrocinio Telan and Benjamin Encartado from the municipal local government unit, and Rudy Gerlaban, practitioner of Good Agricultural Practice (GAP) on vegetable, which was followed with a farm visit to a GAP certified farm.

In Barangay San Quintin, RSQFA, which received free-range chicken stocks in July 2021 started selling their egg production in their community.

On the other hand, Barangay San Francisco members, having 10 kids from their goat stocks, are planning to increase their production further prior to selling.

The FCAs are also expected to establish their respective enterprises by supplying the community with their products in the near future. ###