An answer to food security

Global hunger and food insecurity are perennial issues that confront human societies. In the World 2017 Report of the Food and Agriculture Organization (FAO) revealed that starvation affects around 815 million people (11% of the world’s population). It has been projected that more than half of the world’s population will live in cities in a few years, making it more imperative to improve the conditions of life of the urban poor specifically during crisis such as earthquakes, typhoons, and the recently CoViD 19 pandemic, where agricultural products (i.e. crops livestock, poultry, and fish) are restricted to enter the urban markets.

With aquaponics, one can grow veggies and fish all year round. With adequate support from both the public and private sectors, aquaponics can help fix the food system not only in cities but also in peri-urban communities. Thus, aquaponics has a huge potential as a commercial venture and as a way to provide food. It has been claimed that 25 square feet of plant bed can sustain one person for life.

Food security is a global concern

When scaled up commercially, aquaponics venture can potentially be a food basket in urban as well as in peri-urban areas. Aquaponics’ operation is undeniably earth-friendly. Since water is recycled in a circular manner, it only leaves a negligible footprint from the environment.

In most developing countries where water is considered a precious resource such in the case of highly urbanized cities of the country (i.e. Metro Manila, Cebu, Baguio, Davao) and the 30 poorest of the poor provinces covered by the Special Area for Agricultural Development (SAAD) Program of the Department of Agriculture,  the enormous potential of aquaponics as a sustainable food source can be life-changing.

Aquaponics is a new agricultural system that combines conventional aquaculture with hydroponics in a symbiotic environment. With aquaponics, one can grow high-quality vegetables, fruit, and fish in a controlled environment, all while minimizing the consumption of energy and water. The concept was first introduced almost 40 years ago in the United States. Since then, R&D efforts have been taking place at many research institutions and some enterprises have successfully adapted aquaponics systems at the commercial level. It is an emerging sustainable agricultural model that is also of interest to Australia, Africa, and Europe.

Aquaponics mimics the natural dynamics of soil and water in the environment. The fertilizer in an aquaponics system comes from the fish waste. Fish excrete in the water which is channeled up into the plants’ bed. Bacteria break down the fish pooh into nitrates and nitrites, which become the plant’s food. The water that has been naturally cleaned up by this circular process then reverts back to the fish tank.

Without the use of chemical fertilizers and pesticides, it is the only organic hydroponic method that has proven itself to be commercially viable. Aquaponics can be urban and peri-urban agriculture since it doesn’t require extensive land or soil, and the system can be flexibly installed in limited space in the city. This creates a system of ‘Farm-To-Table’, where city-dwellers have access to fresh, local vegetables.

Sustainability and income turned into one

Aquaponics is a smart and integrated system that combines aquaculture and hydroponics. In this technique, farming is blended with fish culture in an organic, natural, and sustainable way. Aquaponics works based on the principle of symbiosis among plants, nitrogen-fixing bacteria, and fish. If you were to think of the classic triple-helix of cooperation that could be found in a natural ecosystem, then this could be one of the best examples. This makes the system very efficient – less water is used but more food is produced. It has been claimed that aquaponics beats traditional farming in terms of efficiency, growing crops in half the time.

The aquaponics technology empowers households to have direct access to clean food, generate additional income, encourage recycling, and conserve limited resources, such as water, electricity, space, and time. Some aquaponics is run by renewable energy sources such as the sun and the wind; others even tap the law of gravity to make their aquaponics systems work. This enables aquaponics to operate an energy-efficient, sustainable, and eco-friendly way.

What are the startup costs for an Aquaponic system?

Aquaponic systems can vary depending on the design and components chosen, but a good estimate for a fully equipped commercial-sized aquaponic greenhouse can be Php 500,000.00 to Php 1,500,000.00. At home or hobby systems, can start at as little as Php 15,000.00.

Aquaponics can be done either indoor or outdoor that simulate every natural waterway on earth. it is a technology that helps in adapting to and mitigating the impacts of climate change.

As aquaponics technology continues to develop, there are three methods and two of which are primary that have evolved. First, is the media-filled bed system, which many backyard enthusiasts use, and the second is the raft system, which most commercial growers use. The third is the Nutrient Film Technique (NFT), which is less popular.

The three basic components are a fish tank, filter, and hydroponic (raceway). The raceway is interconnected with pipes to become a production system for fish and vegetables in one infrastructure and one body of water. 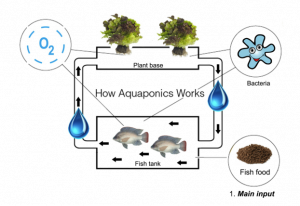 This illustrates the symbiotic relationships in an aquaponics system. Aquaponics works because it’s an ecosystem approach to agriculture. Once the fish are fed, they excrete ammonia, which becomes dissolved in the water.

Nitrifying bacteria, which are purposely cultivated in the aquaponics system, then metabolize this ammonia. These nitrifying bacteria convert the ammonia to nitrite and then nitrate, which essentially is plant food. This nitrate-laden water is then moved to the hydroponic component of the aquaponics system, where the plants uptake and remove the nitrate from the water, thus cleaning the water for the fish. The cleaned water then goes back to the fish tank. 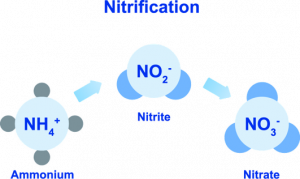 The route from fish to plants is populated by a filter of beneficial bacteria (Nitosomonas and Nitrobacter sp.) that converts the fish waste — mostly harmful ammonia (NH3) and nitrites — into nitrates and other nutritional elements that plants thrive on. The plants take up this natural fertilizer and return waste-free water back to the fish.

The cycle repeats, reusing the self-contained system’s water over and over again, until balance is achieved. Once the system gains equilibrium, it rolls on without much help.

In conclusion, aquaponics can be an effective driver to reduce global hunger and malnutrition, giving flesh and teeth to the overarching goal that “no one will be left behind.”

In our next Urban Agriculture Series, we’ll teach you how to grow legumes, root crops, and young corn at home. ###