PART 3: Livestock and poultry raising in urban and peri-urban areas

Urban and peri-urban agriculture has existed in various forms and places for a long time. It was practiced in the Aztec and Mayan civilizations and in prehistoric Jericho. More recently, it has been banned in some modern cities, but continues to emerge in others. Lately, it even seems to be growing in importance and scope especially during times of crisis as in the case of CoViD-19 pandemic. A city is resilient only if most of its residents can withstand and recover from the effects of a disaster.

Urban consumers use more animal products than rural consumers, and consumption as a whole seems to be increasing. Neglect of the livestock sector can only lead to negative developments, while positive attention can help to uncover the opportunities inherent to this form of livestock production.

Livestock and poultry raising have often been part and parcel of urban and peri-urban agriculture, presenting its own specific problems and opportunities. As with all branches of urban and peri-urban agriculture, livestock and poultry keeping now seems to be recognized for the positive role that it can play on living conditions across the world. Livestock and poultry may offer an opportunity to improve the quality of life through increased cash income from sales, and through improved nutrition. Improved nutrition is attained as these households are likely to consume a diverse and nutritious diet, including animal-based foods. As diets change, as a consequence of urbanization and rising income, urban livestock and poultry production may also, to some extent, meet the increased urban demand for animal-based foods.

Maintaining livestock and poultry in cities is common in many developing countries. Goats, pigs, ducks, quail, chickens, pigeons, rabbits and many other types of animals can be found in cities around the world. Each of these animals has its specific advantages and disadvantages. Particularly small animals are adaptable to backyard conditions, they require little capital to start with, it is easy to sell them and they reproduce fast.

Chicken. A major purpose of having chicken is also to supplement the household revenues in terms of food and cash. With low daily wages, the sale of only a few eggs can be a very substantial contribution to the family income. However, urban households with relatively high incomes keep chickens, especially laying hens, because they think that eggs produced at home are of higher quality than those found at the market. The special liking that people take for village raised chickens (more taste, tougher meat) is expressed at a higher price for these animals. A startup for a low maintenance area in urban areas would be five hens and a rooster. 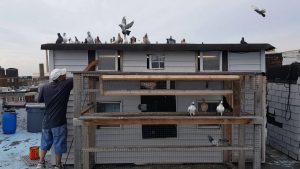 Pigeon. Pigeon keeping is very popular in the Mediterranean region; for instance, in the Nile delta, dovecotes are common in both rural and urban areas. Pigeons can contribute substantially to household diets and income. They do not compete with other animals for space and feed; if fed by their owners, the birds tend to remain in the neighborhood, but they are able to find food within a radius of 15 km, thereby making use of the different vegetation cycles of local plants. In low-input systems, feeding is necessary only during the short period when the animals are getting accustomed to their new home.

Pigeons adapt easily to urban conditions and are a common sight as they scavenge in town squares and markets. Dovecotes, are normally located on rooftops, which makes pigeon keeping possible even for people who live in high rise buildings. Pigeons brood about five times a year and reach maturity at about six months of age; incubation lasts 18 to 20 days and both sexes are involved in the hatching. Surprisingly, in spite of being easy to raise and cheap to produce, this species is very rarely considered in urban food security programs.

Quail. Locally named pugo are small fowl that exist in the wild but can also be raised in a backyard cage occupying small space and is not expensive. Unlike chickens, most city ordinances don’t restrict or outlaw raising quail. They are quiet, small, even-tempered birds that can produce about five to six eggs per week. The capital needed is also very modest and the gestation period is short. In 35 days after hatching, the birds will start to lay eggs.

In urban quail raising, the monetary profit may not be the paramount consideration. It is having a supply of fresh eggs that is probably more important and very healthy low-fat white meat, and supplies the fertilizer you need for your home garden. If more urbanites will produce food, especially healthy food, then food security is enhanced. Even if there are areas that are struck by disasters and they cannot deliver the usual commodities to the metro areas, there will be food available from the urban farmers.

Rabbit. Raising rabbits in urban areas is common in many countries (i.e. Indonesia, Mexico, Ghana and Egypt) where rabbit meat is fast becoming a regular dish (and in others, it already is) and can be found in many restaurants, farmer’s markets, and meat shops. In the Philippines, Filipinos have forgotten that rabbits were introduced after World War II by US Peace Corps and some religious missionaries to help alleviate the problem of food scarcity brought about by the devastation of war. Instead, rabbits have come to be cared for as pets instead of being produced as meat sources.

Because of its tremendous nutritional benefits, the United States Department of Agriculture (USDA) has proclaimed it as “the most nutritious meat known to man.” It is a good source of protein and is recommended for a variety of health-specific specialty diets. It is low in cholesterol, saturated fats, calories, and sodium, and can provide 100% of the recommended daily allowance (RDA) for vitamin B12.

Growing rabbits requires little space and can be done on the farm, backyard, or even a small space at home. Start your rabbit farm on a small scale while learning the basics. A good way to start small is by getting two bucks and 10 does.

In the Philippines, there is a group called Association of Rabbit Meat Producers (ARaMP Inc.) which was organized to establish and develop the rabbit industry in the country, and to advocate the use of rabbit meat in Filipino households. The national organization was formed in August 2015 and presently has 176 rabbit raisers, with the majority members from Central Luzon (Bulacan), which is eyed to be the “Rabbit Capital of the Philippines”.

According to Ms. Angelica Veneracion of ARaMP, their organization is growing despite the pandemic, as they are continuing to develop bigger production capacities; the majority of their production goes to the rabbit raisers who are breeding or expanding their capacity. They have a niche market of healthy meat consumers. The excess bucks are slaughtered and used as the protein source by the families of the raisers and are also being sold at the market in the form of frozen rabbit meat.

Pig. Swine or pig farming allows households to generate supplementary income in peri-urban squatter settlements (slums). Pig keeping adapts well to being a mostly family-type activity, where the role of women is very important, both in collecting household waste and in looking after the animals. Pig production implies a significant reuse of household waste as a feed, and also the waste of commercial enterprises (bakery, market vegetable and fruit leftovers) and industrial (brewery, abattoir) activities is also welcome.

However, urban and peri-urban livestock production raises different concerns such as transmission of tetanus from livestock waste, improper disposal of animal corpses, and chemical contamination from the overuse of antibiotics and pesticides. To address these issues, policies must specify the permissible numbers of livestock in specific locations based on human population density and animal type. ###