skip to Main Content
Farming, a way of living

“Farming, a way of living” depicts the success story of Gabu Farmers’ Association from the municipality of Labason, Zamboanga del Norte province. The group received interventions on the Sweet Corn Production Project.

Farming is the main source of living in the municipality of Labason, Zamboanga Del Norte, Gabu is one of the chosen barangays for the implementation of the poverty alleviation program of the Department of Agriculture (DA) through its Special Area for Agricultural Development (SAAD) Program. The barangay is primarily an agricultural area with some forest areas.

Under the DA-SAAD Program, the local government unit of Labason endorsed the Corn Production Project of the Gabu Farmers Association. The livelihood project intends to increase corn production primarily for food.

The project component includes the provision of corn seeds, organic and inorganic fertilizers, knapsack and power sprayers, collapsible dryer, corn mill, and corn mill shed. The aim of the LGU and the farmers’ association is to sell corn grits that command a better price in the local market.

Gabu Farmers’ Association has 61 farmer members with a radiation area in Lawigan that has 43 farmer-partners also engaged in corn production. This was the first time for the association to receive a project complete with a package of support from the DA.

Moreover, the farmer-partners of the DA-SAADunderwent series of institutional and capacity-building training. The training included Organizational and Project Management, Basic Financial Management, Policy Formulation, as well as training on Package of Technology for corn production.

The farmers’ association charges rental fees for the use of knapsack and power sprayers at P25 and P50 per day respectively. Members of the association have their corn milled at the the project’s corn mill at a discounted rate of P2.00 per kilo while non-members are charged P2.50 per kilo. 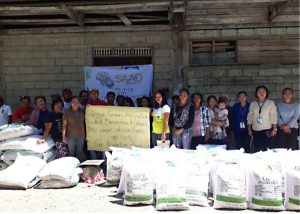 Experiencing their improved capacity to access support from other programs of the DA, the association negotiated with the High-Value Crop Development Program for the provision of water pumps and accessories. The water pump shall provide the water requirement for corn crops during the dry season and in the event of prolonged dry spell brought about by the El Niño phenomenon. The use of a water pump is another opportunity for the association to generate funds. A farmer-member is charged P200.00 for a 3-day use of the water pump for irrigating the cornfield.

As a result of their savings scheme, the association was able to construct a multi-purpose building that is now being used as a storage facility for the small farm machinery and equipment they received from the DA. The building also acts as their work to conduct regular meetings and socialization activities. The “bodega” as they called it, has become a symbol of their unity and a product of their “bayanihan” spirit. They believe in the saying “walang iwanan sa hirap man o ginhawa”.

Hard work and dedication paid off for Gabu and Lawigan farmers of Labason. Though, a slow process, they have become agripreneurs with modest start-up savings in a local cooperative bank. Their dream to rise above the poverty situation started with their small step to develop their small farm and convert this eventually into a flourishing corn enterprise.

Innovation, creativity, diligence, and unity are common traits shared by the members of Gabu Farmers’ Association and their co-workers in Lawigan. The devastation to their corn farm brought about by Typhoon Vinta in the last week of December 2017 and their further sufferings due to the recent El Niño phenomenon cemented the resolve of the farmers to rise from disasters. Together they rose from the damage with each other’s help and with the support of the local government and other national government agencies like the DA. 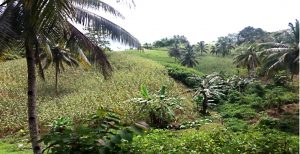 According to the association’s Treasurer Ronila T. Gamulo, it is their first time to experience being agri-entrepreneurs. They were trained on-farm recording, simple bookkeeping, and other technical training including market linkage. They are no longer simple corn planters. They now consider themselves as corn farmers, processors and traders.

“We are no longer subsistence farmers”, said Gamulo. We have food on the table, and we have extra produce to sell to the market. “With the support of DA-SAAD, we found a prospective big market outlet for our corn grits”, she added.

As of June 30, 2019, the association has already become a common service provider and corn miller. They are an emerging agripreneur that needs more support from the government and its instrumentalities.

The project has benefited 104 farmers and most of them are Pantawid Pamilyang Pilipino Program beneficiaries (4P’s) of the Department of Social Welfare and Development.

Farmer-partners take pride in their project because it was the result of their common effort to face the challenges of poverty. Food security and additional income for the farmers’ families were also evident. There was an increased corn production that is why they were able to sell in the local market. The association has evolved into the “consolidator” of corn production and added value through milling and selling corn grits instead of corn grains. Farmer-partners have also been freed from the bondage of loan sharks.

Farmers are contributors to nation-building. If given enough and comprehensive government support, they will go back to their farms.

Increased production which may necessarily result to increase family income is one of the best ways to encourage the youth to engage in farming. This is very evident in the increased interest of young boys and girls of Gabu to join their parents in tilling and attending to their cornfields.

Community-based programs intended for the poorest of the poor should be comprehensive. Like the DA-SAAD, equal importance should be given to capacity building and to material/input support to agriculture. The Gabu farmers’ experience may eventually lead to the establishment of vibrant basic agriculture communities teeming with agri-based economic activities.