skip to Main Content
Be healthy, eat eggs every day!

The Municipality of Midsayap is the center of the market of nearby municipalities, Pigcawayan, Pikit, Aleosan, Libungan, and Alamada, in North Cotabato. Most of these municipalities are engaged in food businesses like restaurants, fast-food chains, street foods, and bakeries.

In 2017, the administration of Midsayap encouraged farmers to organize and register themselves as associations to the Department of Labor and Employment (DOLE). With the help of the Office of the Municipal Agriculturist (OMA), the farmers’ associations then received various projects and interventions from both government and private sectors.

For that same year, the Department of Agriculture’s Special Area for Agriculture Development Program (SAAD) was implemented in the municipality. With the help of the Municipal Local Government Unit (MLGU), the low-income farmers were identified.

Each farmer-beneficiary received 144 layer chickens with a one-month supply of feeds, biologics, a complete set of cages, feeders, and waterers.

A capability and hands-on training on Poultry Production was conducted beforehand.

One of the farmers’ associations in the municipality is the Central Bulanan Farm Workers Association led by Regie D. Valenzuela. This is named from a barangay whose people are laborers, crop growers, and land tenants. It is composed of 53 members; 15 are male and 38 are female.

While the project was still on the procurement stage, the association had already started poultry production. They were able to produce an average of 95 eggs per day and 2,945 eggs in a month. They were able to generate a monthly income of Php 14,725.

The association members, with the assistance of Midsayap OMA, properly handle the feeding, harvesting, and cleaning of the poultry houses. They have anticipated that since poultry production is a sensitive venture, they must ensure that the chickens are free from pollution, noise disturbances, and other environmental issues. 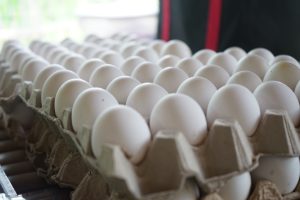 Last January 2019, the association increased its production by 15% of the average harvest and lessen its cost of production by 5%. The products were sold to households, bakeries, and neighboring areas, like Glad 2.

For nine (9) months, the association produced an average harvest of 28,890 eggs, which is equivalent to an estimated amount of PhP 144,450 gross of sales.

Less PhP 103,000 of production cost, the association has an estimated net income of Php 41,450, 25% percent of which will be given to the association fund while 75% will be shared by the members. 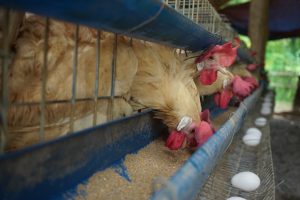 While implementing the project, the challenges that the association met and overcame are the maintenance, manpower, and productivity of the layer chickens.

Rather than a profit-oriented mindset, the association instilled a customer-oriented mentality.

The association divided its workloads among members to maintain the cleanliness of the area.

The record-keeping is presented every regular meeting. The layer chickens are properly monitored to ensure that they will reach their productive life.

Lastly, the association is planning to have additional layer chickens to increase its egg production and sustain the project.

The project is helping both the farmers-partners and the consumers. It gives supplemental income to the members of the association and offers an affordable table egg price to buyers.

For the next years, the association envisioned to be the producer of eggs not just in the barangay but to the municipality of Midsayap.